This week’s The Bold Type was a big one for Jane (Katie Stevens), as she began to come to terms with the realities of living with the BRCA gene. Last season, Jane learned that she’s a carrier of a gene that increases her risk of getting breast cancer, and in “Plan B” she’s faced with some tough choices, including when to have children.

But that’s The Bold Type. You might have gone in thinking the episode was going to be about the Plan B pill, but Jane confronts an even bigger decision than what to do when a condom breaks. We were lucky enough to get the chance to talk to Stevens about this week’s episode. The Middlebury, Conn. native is already busy filming Season Three of the series and hopped on the phone with us from Montreal during a break on the set. [Editor’s note: The following interview has been lightly edited for length and clarity.]

Paste: The BRCA story line is a tough one that effects so many women. How did you prepare to tell this part of Jane’s story?

Katie Stevens: I didn’t have to do much research because my fiancé’s [Paul DiGiovanni] mother passed away from breast cancer. It’s actually a gene that runs in his family on his mom’s side. He has his cousins who were able to catch breast cancer early on and they’re now cancer free.

In terms of BRCA, obviously Paul doesn’t have to deal with that, but it was really easy for me to read up on the preventive measures that you do have to take if you are somebody who has the gene, in terms of figuring out your fertility, which way you want to go about that—because there are so many ways to go about that. I can totally see how overwhelming this is for anyone who has to go through it. It is so close to home for my fiancé and our family. I’m kind of telling that story from my fiancé’s perspective.

Paste: Jane lost her mother at a young age, and this season we’ve seen much more of how that has affected her.

Stevens: I am lucky enough to have my mom and have a close relationship with my mom, so I think it was really easy for me to tap into the emotions of, if I didn’t have my mom, how that would totally change my life and how I view a lot of things. If I didn’t have my mom I, like Jane, would just be surrounded by my dad and my brother, and I think there’s something to be said for female energy and having a strong female presence in your life, which Jane didn’t have. So I just got emotional thinking about that. When I think about being a mom, I think about how my mom raised me and how present she was in my life and those things we did together growing up and those fond memories that I have. I can imagine how you could totally question, “Do I want to have kids? Because I could wind up having breast cancer and leaving my kids without a mother, too.” I think that there are so many different emotional aspects.

Paste: What kind of feedback did you get when you first did the BRCA story line last season?

Stevens: I think that was really emotional for a lot of people. I got some people who do have the BRCA gene and thanked us for doing a story on it. But I mostly got people who had lost a mother to breast cancer and how they coped with that.

Paste: As you are portraying something that hits so close to home for so many people, what becomes most important to you?

Stevens: I really wanted to make sure I did that story line justice. I’m happy that we touched on it in different circumstances. Jane losing her mom, it has not only affected her in terms of BRCA, but as we saw in [“OMG”], it also affected her in terms of her faith and why she doesn’t believe in a higher power, and that was really real for a lot of people too. It’s really nice to tell a story and hear that that’s people’s experiences.

I don’t think anyone can truly understand what it’s like to lose a parent and how hard that is. You go through your day-to-day life and you take for granted what you have. I think Jane kind of shows that in her friendships, too. They have parents they complain about. Sutton [Meghann Fahy] complains about her mom, and I think that that’s always hard. If I’m in an argument with my mom and I vent to Paul, I sometimes have to stop myself. You wish that you had your mom here to argue with.

Paste: Will we see more of this BRCA story line this season?

Stevens: It will continue in [episode] nine. You’ll see her spiral out a little bit. I think until she really decides what she wants to do I think it’s going to be a continuing story line. I know that we just started Season Three, and there’s stuff about it in Season Three as well. It’s so heavily a part of Jane’s life, it has to be part of Jane’s story. 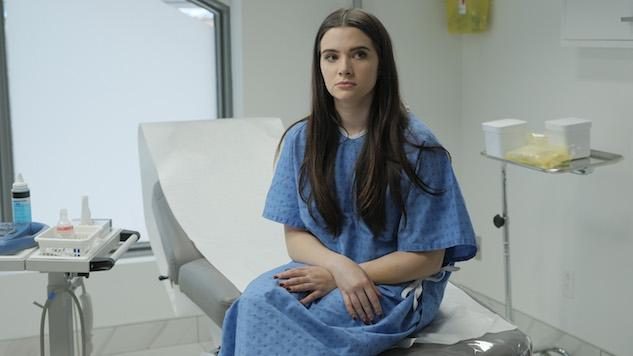 Paste: We got to hear Jane’s brother in this episode. Will we eventually meet Jane’s family?

Stevens: I don’t know if they’re planning on bringing in Jane’s family, but I think that it would be really important. We’ve met Kat’s [Aisha Dee] parents, and in episode nine we’re going to meet Sutton’s mom. [Editor’s note: !!!!] I think it’s really important to see where these girls come from. Jane shies away from vulnerability because of what happened, and I would love for her to kind of have a conversation with her dad and her brother about that.

Paste: And what will happen with Jane and cute doctor Ben [Luca James Lee]?

Paste: The show has tackled so many topics—sexual assault, gun control, the Plan B pill. How important do you think it is for the show’s target demographic to see characters talking about these things?

Stevens: There is so much that’s important. It’s not just women who are my age watching this show. It’s people who are younger than us. So I think it’s important to portray female friendships the way that we do and show people supporting each other and show people we rise by lifting others. You don’t have to bring somebody down to rise above, because that’s not how we do that. I think it’s important to show the topic [of] guns, to show the topic of white privilege, Sutton sleeping with a married man, talking about Plan B, because these are all things that are real and happening in the real world and these women are living in this world. I think that it’s important to show that we should have an open forum to talk about it, to see different views of things, to own our decisions that we’ve made and admit when we’re wrong. As I’ve gotten older, I have taken the initiative to own when I’ve messed up and move forward because that’s all you can do. When we show people on television messing up and never dealing with it, that’s not true to life. I think that it’s really important that we show realistic ways and true ways for people to move through the world. When different variables in the world start affecting you, how do you deal with those in an adult manner and in a way that will cause you to grow? Let’s show people messing up, because I mess up once or twice a day. The most important thing I can say is, we give our characters permission to be human.

Paste: Where else can people see you besides The Bold Type?

Stevens: I’ve done two horror films, one of which [Polaroid] was unfortunately under the Weinstein umbrella and it got pulled, so not sure what is going to happen with that one. But I’m all for it not coming out and for all the women who spoke out to finally have some justice. But the other film I just did was by the writers of A Quiet Place and it’s another kind of horror film, and I get to play a character who is a little different and little more introverted and she keeps to herself and is a little secluded from the outside world. We just did reshoots for that a few weeks ago. Hopefully it will be bought by a studio and maybe go to a few festivals. Hopefully, fingers crossed, it comes out this Halloween. It’s called Haunt.

Paste: You were on the ninth season of American Idol, making it all the way to the top nine and touring with the show. How much did that effect your decision to move to LA and begin your career?

Stevens I’ve always known that is what I wanted to do with my life. But being from Connecticut, and my parents not being in the industry at all, I didn’t really think of it as an option. So when American Idol came into town, that was a great opportunity. Getting so far on the show and doing the tour, my parents were like, ”You have the momentum from this. You should go and take this opportunity and these connections and move to L.A. We’re not going to make you go to college and four years from now try. You have the momentum now.” So I was out there for three years and I was pursuing music, but I just never felt like I was finding a vibe that felt like me, so I felt discouraged and I kind of stopped doing music for a while. That’s when I started pursuing the acting side of it more, and that’s when I started getting success in that. And it just continued. But music is always going to be a part of my life. My fiancé is a music producer and songwriter, and he was in a band that toured for eight years called Boys Like Girls. I am always surrounded by music. He produces songs in the house. We write together. We live in Nashville. Music is still a part of my vision for my career, but I’m just taking life one day at a time.

Paste: We got to see you sing “Mamma Mia” earlier this season. Will Jane have another chance to sing?

Stevens: Perhaps if you tune into episode nine. Nine is one of our favorite episodes.

Paste: Thanks so much for taking the time to talk to me. I’m such a fan of the show even though I think I’m outside its target demographic.

Stevens: It’s so funny. I feel like every person who interviews me is like “I love the show but I’m not in the demographic,” which makes me feel like we have no demographic. It’s open and a free-for-all for everyone.

The Bold Type airs Tuesdays at 8 p.m. on Freeform.

Amy Amatangelo, the TV Gal®, is a Boston-based freelance writer, a member of the Television Critics Association and the Assistant TV Editor for Paste. She wasn’t allowed to watch much TV as a child and now her parents have to live with this as her career. You can follow her on Twitter (@AmyTVGal) or her blog .
Tags

More from The Bold Type